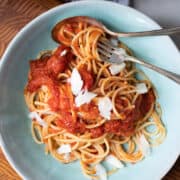 Spaghetti Napoli is one of those recipes that everyone needs in their recipe arsenal. It's a quick and easy tomato-based pasta recipe that is budget-friendly, naturally vegetarian, vegan and gluten-free (if you opt for spaghetti without wheat).

Spaghetti Napoli is a sauce in the Neopolitan style, which includes simple ingredients such as tomatoes, olive oil, onions and garlic. It is a sauce that originates in the South of Italy in the city of Naples. In Naples, the sauce is called la salsa which means sauce. Outside of Italy, the sauce is often referred to as Neopolitan sauce, Napoli sauce, Napoletana sauce and more commonly, marinara sauce.

There are many variations besides the ingredients that form the base of Spaghetti Napoli. For example, for a touch more sweetness, you can add a bit of sugar or even a grated carrot. Other variants of this sauce include the addition of oregano, celery, black pepper and thyme.

The great thing about this sauce is that it will form the base for other pasta sauces, such as Bolognese, which is a type of meat ragù/meat sauce and a marinara cooked with the addition of meat like my Hearty Marinara with Sausage.

I hope I've convinced you to try this Spaghetti Napoli because I promise you'll never want to buy jarred pasta sauce again.

See the recipe card below for all the ingredients and the exact quantity for each.

How to Make Spaghetti Napoli

Sauté onion: To a medium saucepan over medium heat, add the olive oil and onion and sauté until the onion is translucent, approximately 5 minutes. Stir frequently to prevent the onion from burning.

Add garlic: Next, add the garlic to the pot and sauté 1 minute, stirring frequently.

Cook spaghetti: When the sauce is ready or when the sauce is at the halfway mark of simmering, bring a large pot of water to a boil. Once the water has reached the boiling point, salt generously and cook the spaghetti according to the instructions on the packet.

Is Napoli (Napoletana) sauce the same as marinara sauce?

Yes. At its base, it is a vegetarian sauce consisting of olive oil, tomatoes, garlic and/or onions and basil. The sauce is also vegan and gluten-free.

What's the difference between Napoli sauce and Bolognese sauce?

A Bolognese sauce is a thick meat-based sauce consisting of finely cut meat. Whereas a Napoli/marinara sauce is tomato-based without meat. Meat pieces like sausage can be cooked in a Napoli sauce but that would be referred to as a Neopolitan ragù. 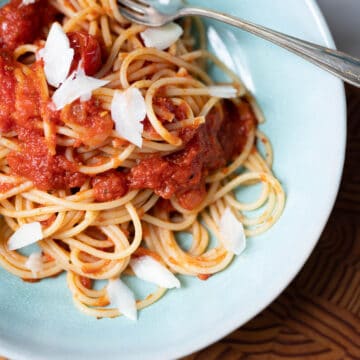 Donna Poirier
Spaghetti Napoli is one of those recipes that everyone needs in their recipe arsenal. It's a quick and easy tomato-based sauce that is budget-friendly, naturally vegetarian, vegan and gluten-free (if you opt for spaghetti without wheat).
5 from 3 votes
Print Recipe Pin Recipe
Prep Time 10 mins
Cook Time 20 mins
Total Time 30 mins
Course Main Course
Cuisine Italian, Canadian
Servings 5
Calories 364 kcal

Colourful, no fuss recipes for everyone.